A Visit With Angela in Mexico City

I went to Mexico City to visit Angela and Lourdes and the family in March of 2014. They live in a suburb of Mexico City that’s not such a great area, so they have to be pretty careful. Angela leaves for school at 5 in the morning every day and is done by 1:45. Her school is enormous (1800 students per session), and the classrooms are packed. There are two sessions for school every day: from 6 AM to 1:45 PM and from 2:00 to 9 PM. It’s good that Angela goes in the morning, because coming home at night is more dangerous. Angela does have a school bus (actually a van) that she rides to and from school every day, so that is safer.

They live in the house of Lourdes’ in-laws, which is a wonderful “casa rosada” (pink house), the only one like it on the block. Teresa has lived there for a long time, and it’s a good-sized house, but there are many people now living in it, and not a lot of money. They have finches, three little dogs and a ferret as pets. Angela and her mother share a room at the very top of the house, up a very winding spiral staircase.

Lourdes has a little work caring for a woman with cancer. She makes 200 pesos every time she goes (2 to 3 times a week), about $15. So she makes $30 to $45 per week, and to get to work she has to travel very far by bus and the metro. Although Mexico City is jam-packed with people, nothing is very close or walkable, and taxis, buses and the metro are how people get around. Taxis are far too expensive, so people take the metro a lot (which just almost doubled in price, from 3 to 5 pesos per ride). While that may not sound like a lot, when you are only making 200 pesos a day, it’s a lot to spend to get somewhere.

I met Angela and Lourdes downtown the day after visiting their home, and took them to the Museo de Arte Popular (Museum of Folk Art). It was really fun looking at all the folk art, videos of various indigenous dances, and wonderful colors. She really enjoyed the miniatures, and the animal folk art. We went out to lunch, wandered around amidst the insanity of a Saturday in downtown Mexico City (an absolute sea of people!), watched street performers and a “precioso” performing dog, listened to a woman talking about the situation in Venezuela, stopped at the cathedral for a well-deserved rest, and had yogurt before parting company.

Angela is a wonderful, serious, sweet and very shy girl. She doesn’t smile for the camera easily (but that’s pretty hard anyway), but when she does smile, it just lights up her face. Her favorite thing is chocolate. Her favorite animal is a tortoise (Lourdes’ is a dolphin). She thinks she would like to be a doctor now (but we know that may change!). She said she hasn’t had yogurt since third grade, when she left the U.S. She wants very much to see her brother Oscar, who stayed in the U.S. We are hoping that when she gets her passport, and maybe if he gets one, they can visit one another. She talks about wanting to go back and live with him, but our contact Vicki has been talking to both Lourdes and Angela about what a bad idea that is. If Angela returns to the U.S. she will have no one to care for her. Oscar is still a kid and can’t take care of a 12 year old girl. Her aunt and uncle have their own children and their own lives and don’t want to care for another one. So we are hoping that we have managed to convince Angela that staying with her family in Mexico City, despite all the problems, would be a better way to go. In 6 years, she can go wherever she wants, and if her grades stay high, she may even be able to get a scholarship to a school in the U.S.

These are just a few photos of my visit with Angela and her family. Please go to her page to see all the rest. There are a lot and they are really fun! 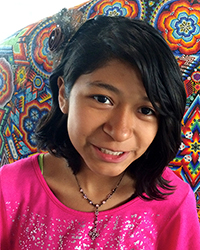 Angela, with a rare smile at the Museo de Arte Popular (click to enlarge) 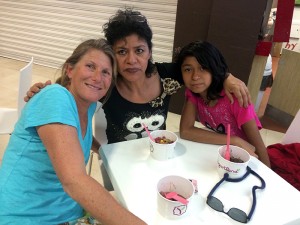 A very tired group of gals at yogurt (click to enlarge)

Angela was too shy, but Lourdes wanted her photo taken! (click to enlarge) 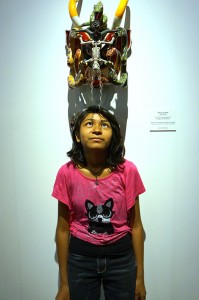 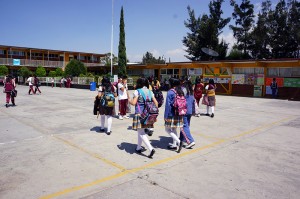 The main courtyard in Angela’s school, as the students for the afternoon sessions are arriving (click to enlarge) 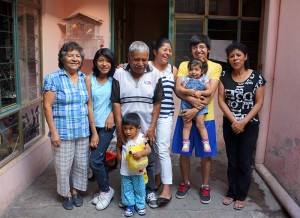 Angela’s family. It’s not easy to get them to laugh for the camera, but when they do, it lights up the room (click to enlarge) 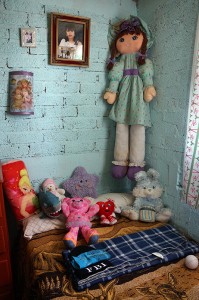 Angela’s bed, in the little room she shares with her mom (click to enlarge)