A Visit with Naume and Rebecca in Uganda

Christa went to Uganda in November to visit Naume and Rebecca, and meet Robert and Rose, our contacts there. Please check out the pages for Naume and Rebecca for more photos, videos and descriptions, but here is a little sample.

Robert and Rose founded a church and a primary school in the division of Kawempe in Kampala. Kawempe is a low-income division of the city, which boasts 9,000 people per square kilometer. It’s crowded and noisy and filled with life and laughs and color. Roosters wake you in the morning, the roads are filled with deep ruts which only get deeper in the afternoon rains; women wearing fabulous colorful long dresses walk gracefully with heavy packages or loads of fruit balanced on their heads.

Robert and Rose Nabulere started Miracle Destiny School in 2008. They are now building a high school about 30 km outside of town which will open in February of 2015. The high school will also be a boarding school and have a vocational component for students who don’t go on with their studies, so they can learn things like beauty school, mechanics, etc. They also hope one day to build a university and medical clinic. These are people with a vision! 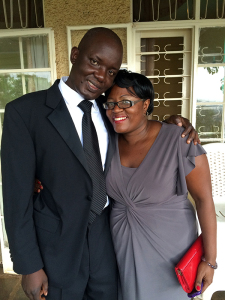 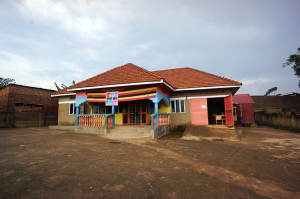 There are government schools in Uganda, and they are free, but uniforms and supplies still cost, and the classes can have as many as 120 students in each one. Because of this it is easy for kids to drop out and teachers and parents won’t know. Robert and Rose wanted a school that had small classes and gave more personal attention to the students. They have turned away at least 100 students because of their class size limits, until they can get more space, money, teachers and supplies. 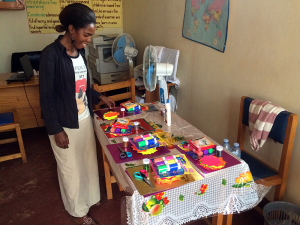 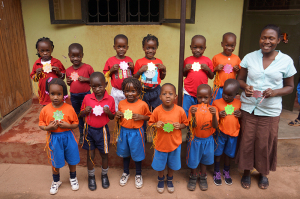 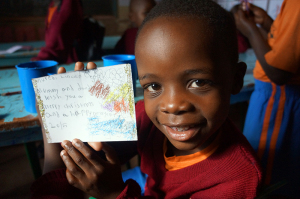 Christmas cards to Mummy and Daddy (click to enlarge) 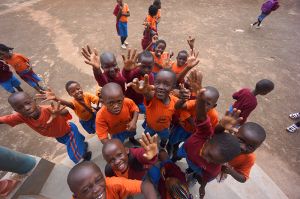 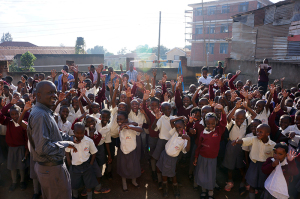 All the classes gave me a very wonderful welcome as I visited each one. The Primary Six class (6th Grade) did this dance and song and I wanted so much to clap along instead of film!

Meeting Naume and her family was wonderful. Naume’s mother, Harriet, is 40. She used to work at a soap and chalk factory. She was paid $1.50 per day on the days she could work. She has, since 2011, worked as an administrative assistant and “social worker” of sorts at the school. She is tall and lovely, statuesque with a gorgeous smile and a great voice. She sings in church every Sunday. Naume has four brothers and sisters. Her oldest sister is 18 and has a child of her own. She does not live with the family. Zach is 17, Patrick is 11 and Israel is 8. Naume is a tall young lady, quiet and serious with a huge smile. She doesn’t say a lot, but clearly loves performing at church and in the concert. She is a great singer and dancer, too! Here is a video of her singing at church the Sunday I arrived. Although I was on the wrong side of the room to get a good view of her, she’s the one doing most of the singing way over there on the right.

Naume at Church from One New Education on Vimeo. 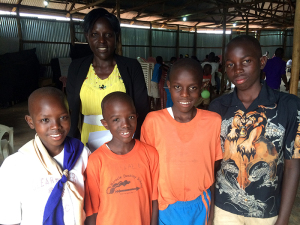 From left, Naume, Israel, Patrick and Zach, with Harriet in the background (click to enlarge) 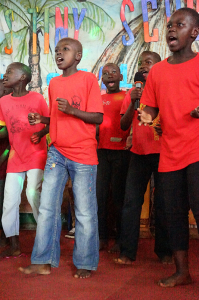 Naume (in jeans) dancing in a concert performance (click to enlarge) 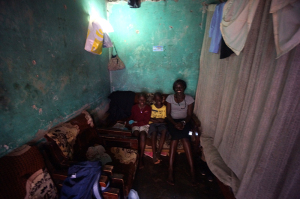 Naume, her brother Israel and her mother Harriet in their home. They have no electricity; the light in the corner is a solar light Christa gave them. (click to enlarge) 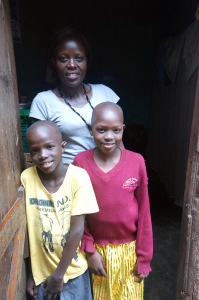 Rebecca’s family is just as lovely. Her mother Jane, also known as Mama Rebecca, works selling greens on the street, and with that she supports Rebecca and her older daughter Loy, who just graduated from 7th grade. They live in a tiny two-room house with no electricity. They cook inside when it’s raining, which is most afternoons. Rebecca is adorable, and has a wonderful smile. While I was there, I discovered that their tin roof leaks terribly and so I checked into having it fixed. The price would be a whopping $35. The owner of the house came by while we were checking on it, and assured us it would be fixed. We’ll keep in touch, because no one should have to live and study in those conditions.

Rebecca and her mother Jane, and sister Loy (click to enlarge)

Rebecca and her mother with Harriet inside the house (click house) 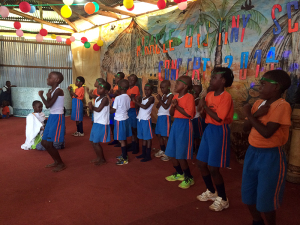 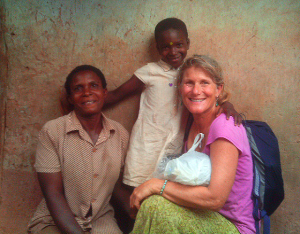 And just because the year-end concert was THE biggest thing going on for the school and the kids while I was there, I thought you should see a couple of the performances. The first one is the Primary Six students doing a Ugandan dance in traditional costume, and the second isn’t exactly a performance, but rather the unabashed joy of small and large kids everywhere when fun music comes on. I couldn’t help myself and when I stopped filming, I had to join them and dance. How often do you get to dance with Ugandan kids to Jose Feliciano’s “Feliz Navidad?” Talk about your cultural connections!

Remember, be sure and check out Naume’s and Rebecca’s pages on the website for the full complement of photos, lots more videos, and some more descriptions of the trip. We are still waiting on the results from their final exams and their year-end letters to us, and when we get them, we’ll let you know!

Next up: Tanzania, and our girls there! Happy Holidays everyone!