SO much has been happening in the past few weeks; it’s been hard to keep up with all of it. Here are some highlights from Haiti, Nicaragua, Honduras, Uganda and India:

All of the girls showed up (Fatima and Michel were right on time after being slightly reprimanded for not showing up to the movie at all haha). Teresa showed up fashionably late, but she did show up and participated. We also invited Tatiana and Alondra to attend, and they came with Sua. Anyway, during the charla, Blair talked to them about why it’s important to take care of themselves, different forms of protection and where they can get them plus the benefits and detriments to each one, emphasizing which ones prevent STDs and which prevent pregnancy, plus how they are to be used. She also emphasized the fact that they can get them all for free in a health clinic or at the hospital. We watched a great video that talks about the cycle of teenage pregnancies and the effect it has on mom and baby and family, and how that can be reversed if a girl grows up in a positive environment, gets an education and is supported to make her own choices in her life and to choose when she wants to form a family and how.

We also did a couple dinamicas, one where they represented two different families. In one family, the couple both studied and got a college degree, got jobs and were economically settled when they decided to start a family – she talked to the girls about this and involved them in asking what they studied, what kind of job they had, etc. Then the other family represented a young couple (high school age) who got pregnant at 16 and struggled…the baby gets sick, they don’t have money for medicine and have to “sell” something (represented by taking a piece of jewelry from the girls during the dinamica), have more kids, the parents don’t get to study and end up getting informal low-paying jobs to make ends meet. The idea for this was for them to see the relationship between making responsible choices, accomplishing their educational goals, etc and deciding when they want to start a family compared to being thrown into it before they’re ready and having to put their goals on hold while raising a child.

They also learned how to properly use condoms. I know that Tatiana and Alondra and even Sua are a little young to be doing it, but we figured it is something they should know how to do and even if it was a bit silly for them now, at least they have a background for later on. We emphasized to them that if and when they decide to become sexually active that they need to be proactive about protecting themselves because they are the ones that will get pregnant if they don’t, and if their novio says they don’t have a condom, they should be prepared so there are no excuses. Plus, it’s their right to protect themselves because it’s their body!

We are so glad that the girls were able to do this class. We’d like to have classes like this for everyone, boys and girls, but we can only do so much, so at least these girls have heard a little about this subject now. Hopefully it will help! Some photos from the class are included at the bottom of the page.

All the other girls are doing pretty well. There have been some big upheavals at the orphanage in Tanzania, and as that situation becomes clearer, we’ll keep you informed. But all the girls there are OK, and there is a new letter up from Husna on her page. In Nepal, Bharosha is shining, as usual, and Roshani is improving a bit. This coming year, her classroom teacher will be our contact Subash, so he is already making plans to help her after school with special tutoring, for which we are very grateful.

Enjoy catching up with our girls, and as ever, thank you so much for your support! We keep growing and helping more girls, all thanks to your generosity. 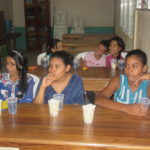 The girls at the class for sex education (click to enlarge) 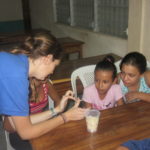 Learning how to use a condom (click to enlarge) 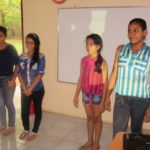