We have lots of news, so we won’t overwhelm you with long details here, but hope that you will go to some of the pages to learn more.

To start with, we have three new girls! Bharosha (who is the featured image on this week’s blog) and Swostika are from Nepal, and Mamta is from India. We will be posting pictures as we have them, but for now, you can go to their pages to learn a little about them and how we met them.

Our students from Nicaragua continue to do really well. Yosmari, Yulisa and Glenda have done so well in school that they were asked to participate in the annual Independence Day parade on September 14. It’s easily as big as July 4 here in the United States, and one of our contacts from El Sauce tells us that the whole stadium was packed, with people standing and sitting everywhere if they couldn’t get seats. Although the girls here don’t look entirely happy to have their pictures taken (who ever does?), our contact assured us that they were very proud and happy to be asked to participate.

Yulisa (left) and Yosmari, getting ready for the parade (click to enlarge)

Glenda (right), in her parade costume (click to enlarge)

October 11, was International Day of the Girl. This year, we were a bit busy, but next year we plan to celebrate by having our Family Dance Party and Fundraiser on that day. One of our contacts did, however, celebrate with her girls in Mumbai, India. Aarti Naik runs a program in Mumbai, India, called Sakhi for Girls Education. For the lower classes in India, education for girls is not considered very important, and often families will spend what little money they have on the boys, leaving the girls to go through a sub-standard state-sponsored education. Often they are removed from school in their early teens. When Aarti was a teenager, she wanted to learn and stay in school. Against the wishes of her parents, she did so. She worked hard, took the tests to pass her schooling, and succeeded in graduating. She wanted the same opportunities for girls in her area of Mumbai, so she started Sakhi for Girls Education to help them succeed. A Sakhi is something like a big sister, or a mentor. She provides literacy and other programs in the slums of Mumbai that girls can attend after their normal schooling (which she says does not provide a very good education). She recently won an award from India for her work, and has had several articles written about her and her efforts. Her parents are very proud, and we are very happy to have met her and to be working with her. She is doing wonderful things for the girls in her city, and it is clear that she has passion and drive and a huge heart. 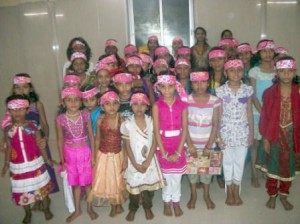 Girls from Sakhi for Girls Education in Mumbai, India, celebrating International Day of the Girl 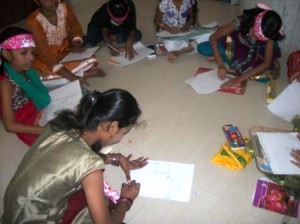 Students from Sakhi for Girls Education in Mumbai, India 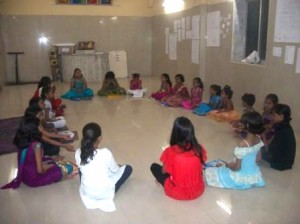 Studying together in Mumbai, India 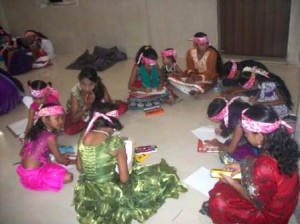