Hello everyone, a few months ago we mentioned that we have accepted a new student from Guatemala: Loyda Elizabeth Lopez Cabrera. We wanted to take the time to properly introduce you now and, of course, there is more information on her page.

Several members of the board actually met Loyda in 2019, during a visit to Guatemala with the Flagstaff Arts and Leadership Academy. She impressed us with her beautiful Marimba playing while we were helping paint a mural on the wall of the cultural center run by her family.

To introduce you, we feel it best to use the words of her sponsor, Anna, who has known her and her family for a long time.

It is with great pleasure that I present the scholarship candidate Loyda Lopez Cabrera from Concepcion Chiquirichapa, Guatemala for your consideration. Loyda is a very bright and passionate 18-year-old Maya Mam musician and student at the conservatory from the Guatemalan Highlands. She is a part of a family of gifted artists including her father, an applied linguist of the Mam language, and her four brothers, Oliver – a curator, Rony – an epigraphist, Danilo – a skilled woodcarver and Judiel – a fine artist. She also lives with her two nieces and peers, Lady and Amarilis, daughters of her eldest brother who passed away 7 years ago.

There are many reasons why I nominate Loyda. She is an exceptional human being. Not only does she shine with talent when she plays the marimba and piano, she has an exceptional determination and sensitivity. Since she was little, she has loved music and she always looked up to her late brother Edgar as an inspiration to learn to play new instruments. As a child she studied at the music conservatory but soon had to leave her dream aside to continue on with her formal education.

When I met her three four years ago, she was struggling to finish 9th grade and hurting to continue on with her passion to study music. Her family has always sought out the best for Loyda, and the condition for allowing her to study music at the conservatory was to finish 9th grade with a high average. Time was running out though, the conservatory was beginning its last year of accepting teenage admissions and Loyda’ s passion was also deterring her from focusing on other subjects in school. At Vida Digna our job is to look for feasible educational options for young people in tough situations, advocate for them with their parents and educational institutions, and support them as they realize their dreams. Our function was put to work in Loyda’ s situation as we helped her build a case for simultaneously continuing 9th grade in weekend classes while starting back up at the conservatory. Against the odds she was able to reach her goal that year. She has been working steadily towards her passion and at the same time is developing a critical voice in favor of young Mayan women. It has been beautiful to witness her growth. We hope you can join us in making her dream come true.

Loyda’s application letter to us was just as lovely as she is.

I hereby send you a greeting from the village of Duraznales, Concepcion Chiquirichapa, Quetzaltenango, Guatemala. My name is Loyda Elizabeth Lopez Cabrera. I am 18 years old and I study at the Jesus Castillo Conservatory of Music in Quetzaltenango.

When I was little, it caught my attention when I saw people playing instruments. And well, that’s where the love and passion I feel for music began. I began playing an instrument when I was 8 years old. I began playing the tun [a Guatemalan instrument, like a teeny little marimba] with my brother every day. I felt like music always filled some void, and after a while I began to learn how to play the marimba. And then music turned into a passion that grew bigger every day. And when I finished primary school, I decided to study music. Every week of that year was very complicated because we didn’t have enough money for transportation, and my father began to sell beans to pay for our transportation. I finished my first year and tried to continue to my second year but the economy was terrible. I stopped studying for four years, and recently decided to study again.

I have three dreams with music, and they are:

To play in a marimba group,

Be a part of a mariachi group

And more than a dream for me, this is a goal that I have to achieve.

If you award me this scholarship and this opportunity to study, I promise to give my best in this remaining six years of study at the music conservatory and also to do my best in each performance that is presented.

Thank you for taking the time to read this letter, and for helping young people who need it. I say goodbye thanking you for everything you do for young people. 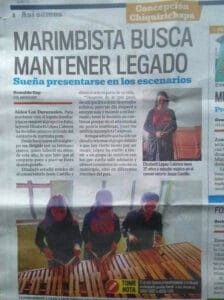 Newspaper article about Loyda. The title translates to, “Marimba Player Seeks to Maintain a Legacy.”

Most recently, Loyda was part of a celebration of indigenous Maya Mam culture during which she played the marimba. She is an extraordinarily talented young woman, and we are so excited to welcome her to the foundation. The pandemic and general life in Guatemala has not been easy on many people; that Loyda is still determined to move forward with her dreams makes us very happy, and we are delighted to be able to help her achieve those dreams.