Where Are They Now? ONE Graduates

Since 2019 is a big year in that we will add four more high school graduates to our group, we thought it might be nice to let you all know where our earlier graduates are in their lives.

Karina was our first graduate, way back in 2016. Karina never wavered in her desire to be a tourism guide and was overjoyed when her score on her admission exam was enough to allow her into that program at the university. Although one really needs no special training to be a tourist guide in the United States, in Nicaragua students go through a rigorous five-year program where they learn all about Nicaragua’s history and culture. They make several field trips to important destinations in the country, do reports and research on the history and culture of other Central American countries, take English lessons, even learn how to tend bar!

Karina attends the national university in Leon, which is about 90 minutes from El Sauce (and another hour from her home on the mountain). Because she doesn’t have anywhere to live in Leon, she attends Saturday classes, which is a challenge, but she is thriving. She is currently finishing up her third year in the university, with two more to go, and she absolutely loves it. She is learning so much, and it really seems there was no better program for her to be in. She is so curious and interested in her country that to be able to travel and see more of it and learn more about the wider world has just been perfect for her.

Since Karina graduated before the board voted to support graduates beyond high school, Christa has been paying personally for her education, and she can’t think of a better way to spend her money! 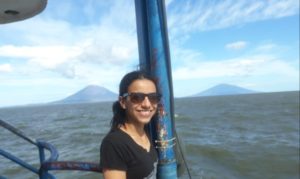 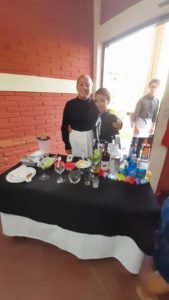 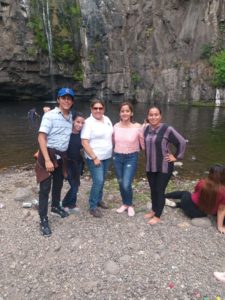 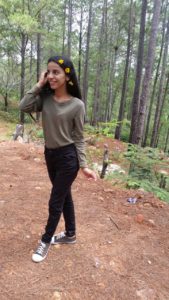 Alicia was our second graduate, in 2017. Alicia lives in a tiny town outside of Xela in Guatemala. She was the first person in her family to graduate from high school and wanted nothing more than to help her younger siblings do the same. Although she really wants to create a career, likely in weaving and sales, she decided that for now she needs to work and help her siblings through school. She is working at a restaurant, but when we saw her in 2018, she was clear that she will not be doing that forever, and that she has ideas she will pursue for her future. She has been participating in workshops run by Colectivo Vida Digna that are designed to give women skills and experience needed to start their own businesses. When it is time for her to decide on her future, we have no doubt whatsoever that she will succeed. 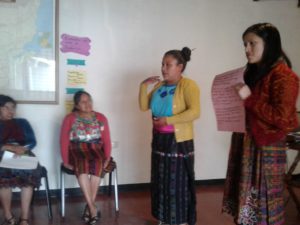 Alicia participating in a business workshop (click to enlarge) 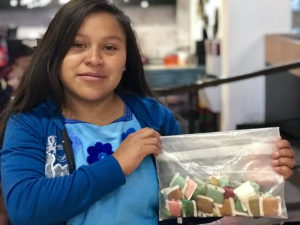 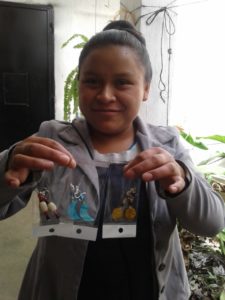 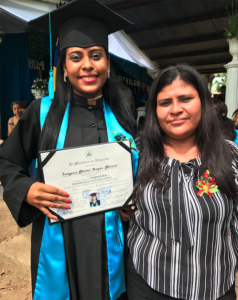 Michel at her graduation in December of 2018 (click to enlarge)
Michel was our third graduate, in 2018. She was the first student that graduated after our board decided to help students after high school however we can, so we have been supporting her in the university. She turned in an impressive application for post-secondary aid from us, and we are delighted to be able to help her. She attends the university in Esteli, which is about 90 minutes from El Sauce, where she is studying to be a teacher. Like Karina, she attends only on Saturdays, which means catching a bus at 5:30 in the morning. But she is loving being in school, and she tells us that she is so proud of her test scores and the work that she is doing. Since we haven’t seen her since her graduation, we don’t have any pictures, but we’ll have news as soon as we return from this December’s trip.

Husna, as you have already read, graduated early this year, and is now in nursing school in Tanzania. When we have photos and news, we will definitely update everyone, but we are just so proud and happy for her.

And finally, we want to update you on Glenda, in Nicaragua. If you remember, Glenda left the program several years ago because she got pregnant in her second to last year of high school. We were sorely disappointed, but delighted to hear that after she had her baby boy, she went back to finish high school, and took her admission exam to get into nursing school at the university in Leon. She is in her third year of nursing school, and she loves it. Things have been hard for her at home, and she had to take time off school this year to earn some money to be able to continue studying. Part of her program involves practicals where she is assigned to other towns and has to be away from home for several weeks at a time (and for which she does not get paid). This time around, it was too challenging to be away from home and pay for school, so she is working now. She is very determined to go back to school and finish and having seen her accomplishments thus far, we are pretty sure she’ll do that. Christa helps her out from time to time with a little money to ease some of the strain. 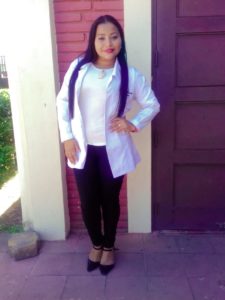 Glenda sporting her nursing coat for her practicals (click to enlarge) 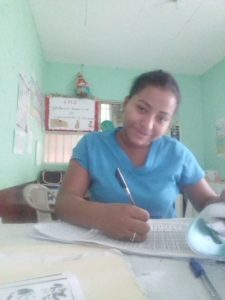 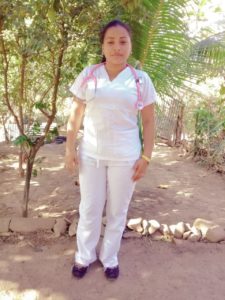 In a few weeks, we’ll have more updates on the upcoming graduates: Elizabeth, Mireya, and Sua. And we’ll keep you informed from time to time on the progress of these dedicated and wonderful young women whom you have all helped to succeed this far. We can’t thank you enough, and we wish all of you a very Happy Thanksgiving.