Christa met Husna and her mother and father when she was in Tanzania. Husna comes from a Muslim family, and her parents really support her education, which is fairly rare among Muslim families in the country. Greg and Shannon Higgins, our contacts in Tanzania, also try and help local students who are not part of the orphanage, and so while Husna is not living at the orphanage and does have a family, they wanted to meet her because of her story. We’ll let Greg describe her.

“Husna Kidumo Romadhani comes from a Muslim family in Pasua, outside of Moshi, Tanzania. She has parents who support her in her education (which is rare), and she wants to be a doctor very much. She is very serious and dedicated to her studies. She is 14 or 15 and entering her third year of secondary school (Form 3). She has taken her national exams that follow Form 2, and we are waiting for those results, but she has already done well enough in school to move onto Form 3. Her grades in Form 1 were fantastic, but they fell precipitously in Form 2 due to the fact that her father couldn’t always pay the tuition on time. When a family can’t pay the tuition on time, the student gets sent home until the money comes in. Needless to say, this can have a terrible affect on the student’s performance. Here are her Form 2 grades with her Form 1 grades in parentheses:

The school Husna attends costs 1.6 million schillings per year, which is about $1,000 US. With an average monthly income of around $85 to $95 to care for five members of the family, this is a stretch. Her father works as a driver, and had been paying for Husna’s tuition by selling some things and borrowing, which shows a great commitment to educating his daughter. We have agreed to pay half of the first semester’s costs, about $250, with the family providing the other half, and see how her grades are at the end of the semester without the fear of being sent home for non-payment. If she does well, we will pay the same for the second semester. We have signed a written agreement with the father that expresses all of this in writing so there is a record of it.

Husna must improve her performance as part of the support. She cannot fail any classes.  I have faith that she will do so.  I am happy to help this girl, as she can become one more educated Islamic woman. This is what is going to change all of the jihad lunacy in the future.” 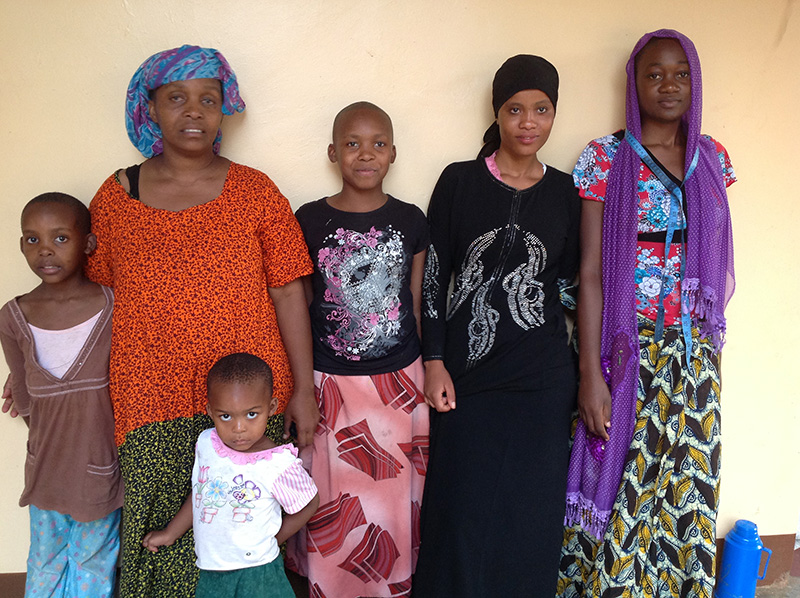 Husna, in the middle, with her family 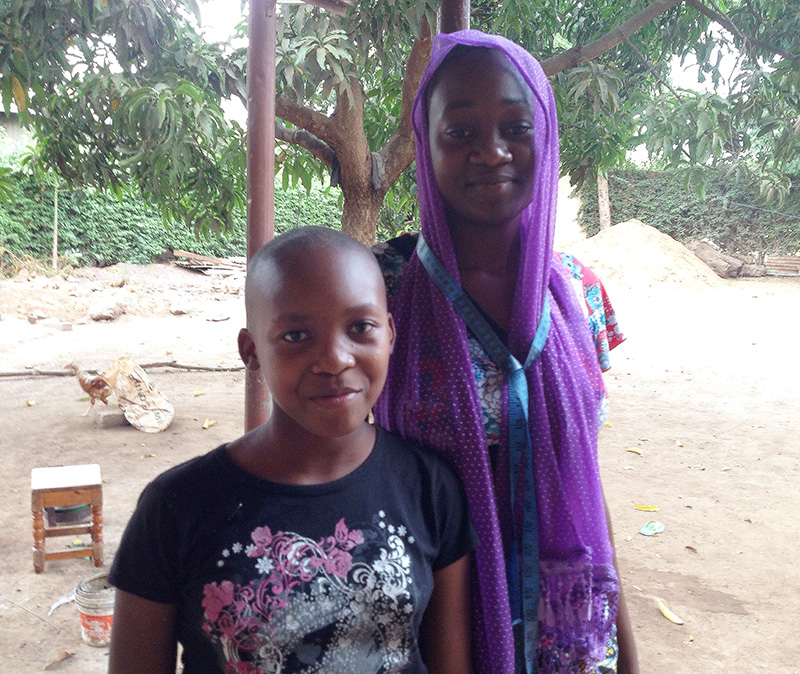 Husna (left) with her cousin 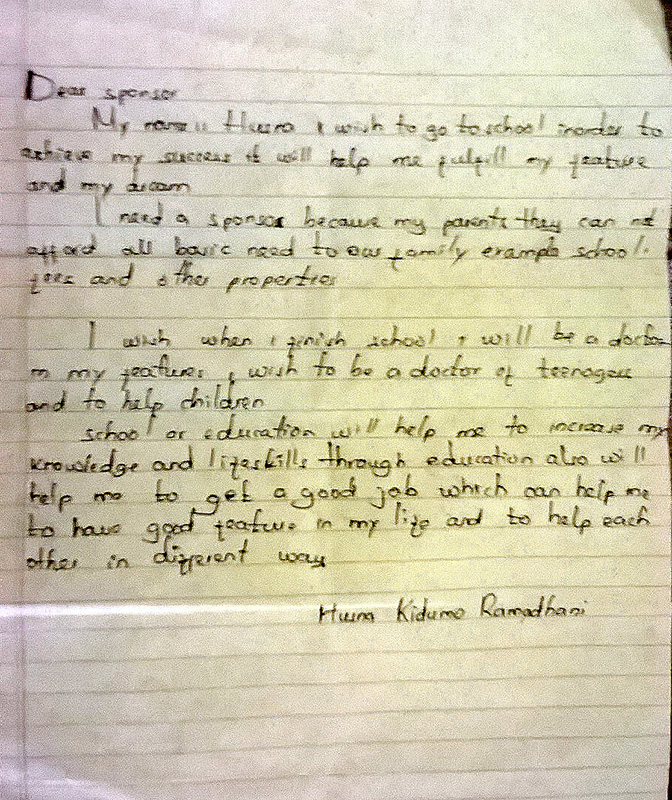 Husna’s application letter to us

Husna’s letter to us for her application is very sweet and serious. Although she speaks very good English and the letter is in English, it’s a little hard to read the image, so we’ve “translated” it here:

My name is Husna and I wish to go to school in order to achieve my success. It will help me fulfill my future and my dream.

I need a sponsor because my parents they can not afford all basic need to our family, example school fees and other properties.

I wish when I finish school I will be a doctor in my future. I wish to be a doctor of teenagers and to help children.

School or education will help me to increase my knowledge and life skills though education. Also will help me to get a good job with can help me to have good future in my life and to help each other in different way. –Husna Kidumo Romadhani”

The board has agreed to start with the $250 that Greg and Shannon decided upon, which is half of a semester’s fees. Once we see if Husna’s grades come up now that her family will not be under so much pressure, we will decide where to go from there. The board has approved up to $1,000 for an entire year’s fees, but if her family can pay some of it, we’d like to have them do so, just to make sure they are invested in their daughter’s education. Her father has recently been having some heart problems, so if he is no longer able to work, or something happens to him, that will definitely play into our decision as well.

We’re very excited to see what Husna’s first semester grades are, and to see where she goes with her life!

Shannon visited Husna at her school during Shannon’s October visit to Tanzania. She tells us that Husna is very happy with her studies, and she will be finishing soon. She says that Husna has decided not to continue on for a bachelor’s degree in nursing—at least not for now. She has worked so hard, and done so well, that we are just delighted that she has enjoyed herself and is satisfied with her work. If she does decide to go on for further studies in the future, we will happily talk to her about an application and potential funding. What a remarkable woman – and we are so proud of her! 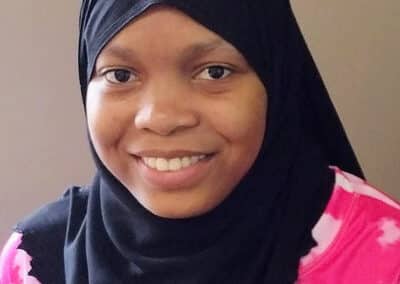 The most recent update on our nursing student Husna is a wonderful one. Shannon visited Husna early in the year and let us know that Husna is thinking about continuing on for a bachelor’s in nursing after graduating. That’s so great to hear; we have sent her an application for post graduate studies so hopefully we will be supporting her for her future studies. Shannon also sent us a beautiful picture of Husna; even though it’s a bit blurry, it’s easy to see how lovely she has grown. 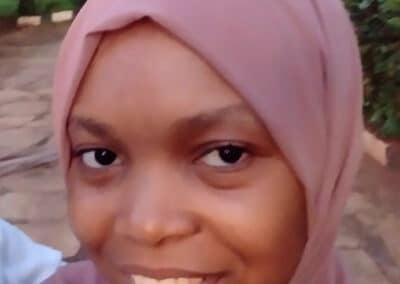 Shannon visited Husna in the middle of the year. She tells us that Husna is in her last year of nursing school and doing very well. She’s doing so well, in fact, that she has plans to continue on for an advanced degree in nursing after this. We couldn’t be happier for her!

Shannon was able to visit Husna during her visit to Tanzania in January, and she reports that Husna is thriving at her school. She loves the classes and is doing very well, not that we are surprised! Shannon gave Husna some presents from us, and took Husna and a friend out to lunch. We are just so happy for her! 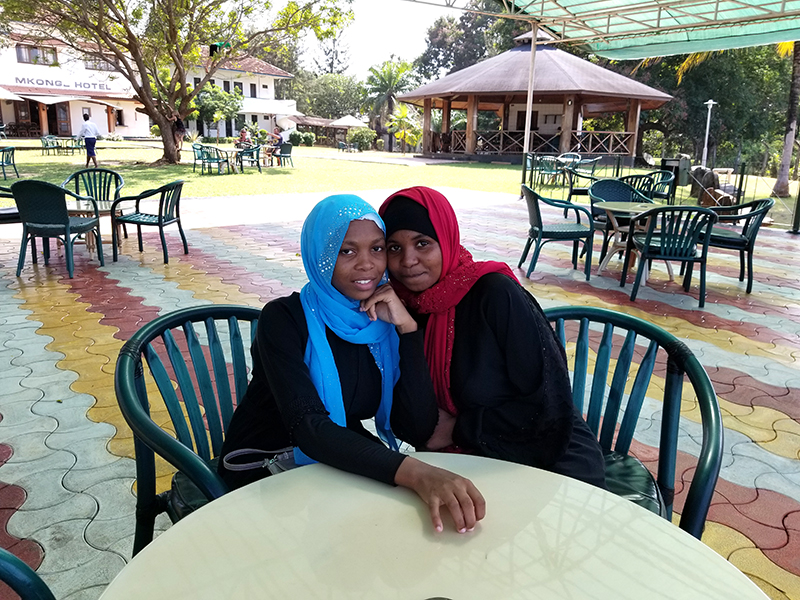 Husna in the blue hijab, with her friend at lunch 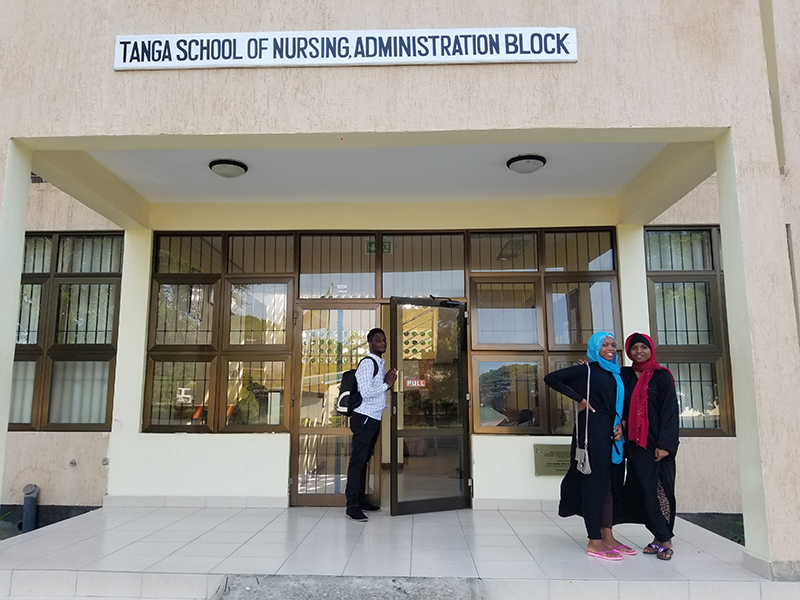 Husna at the office of her nursing school 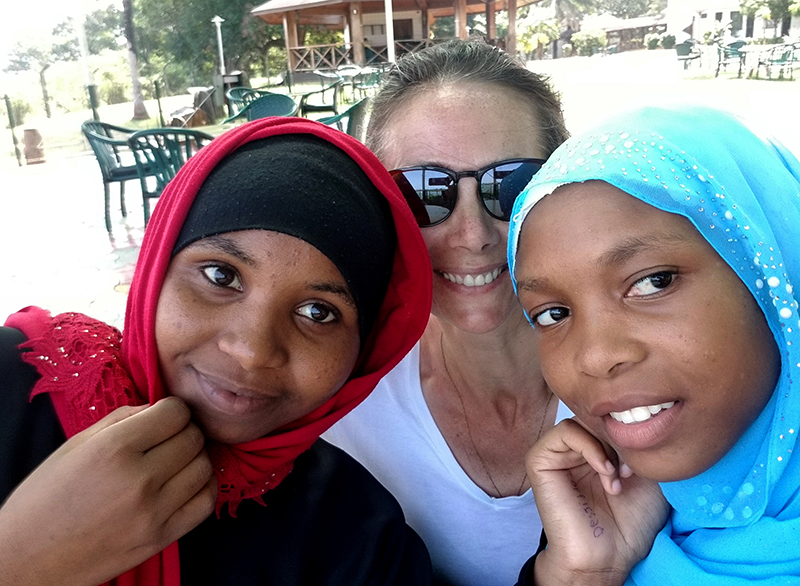 Husna graduated from Form 6! She opted to graduate a few months early and take her test for the university. She was offered nursing school, and has already started classes! We couldn’t be happier for her, and prouder of her efforts. This is particularly inspiring because our contact Greg tells us that less than 3% of students continue on beyond Form 6. We will keep you up to speed on her progress in nursing school, but we have no doubt she will shine, since she is obviously very dedicated, intelligent, and thoughtful. 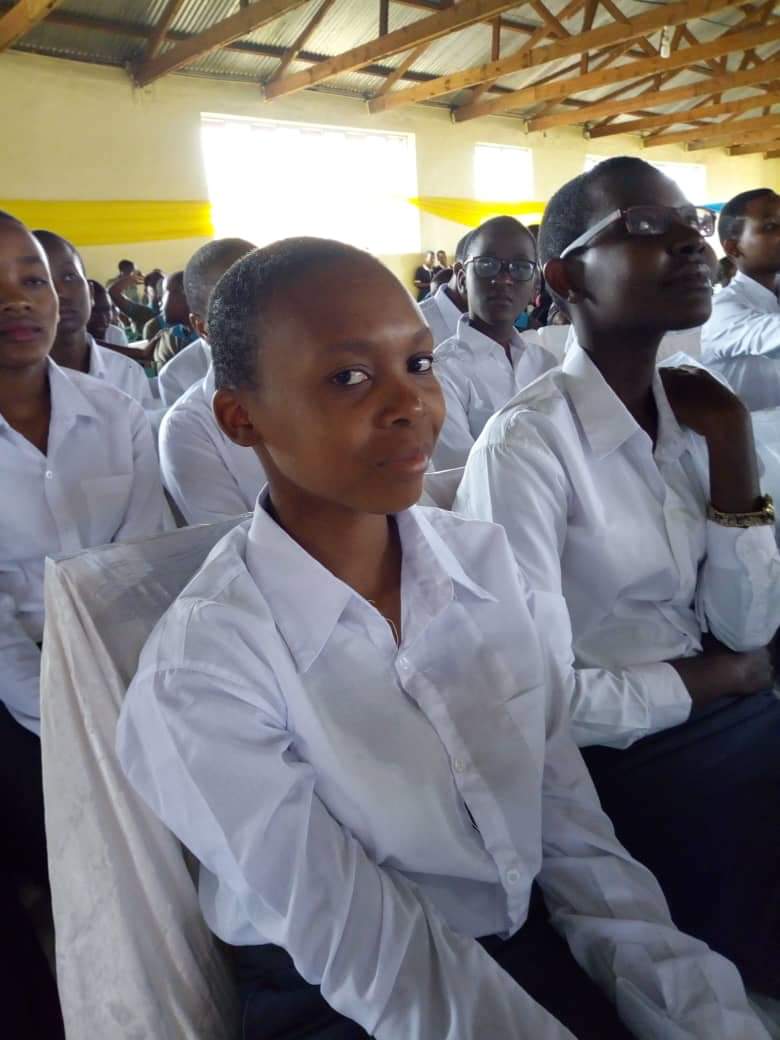 Husna at her graduation 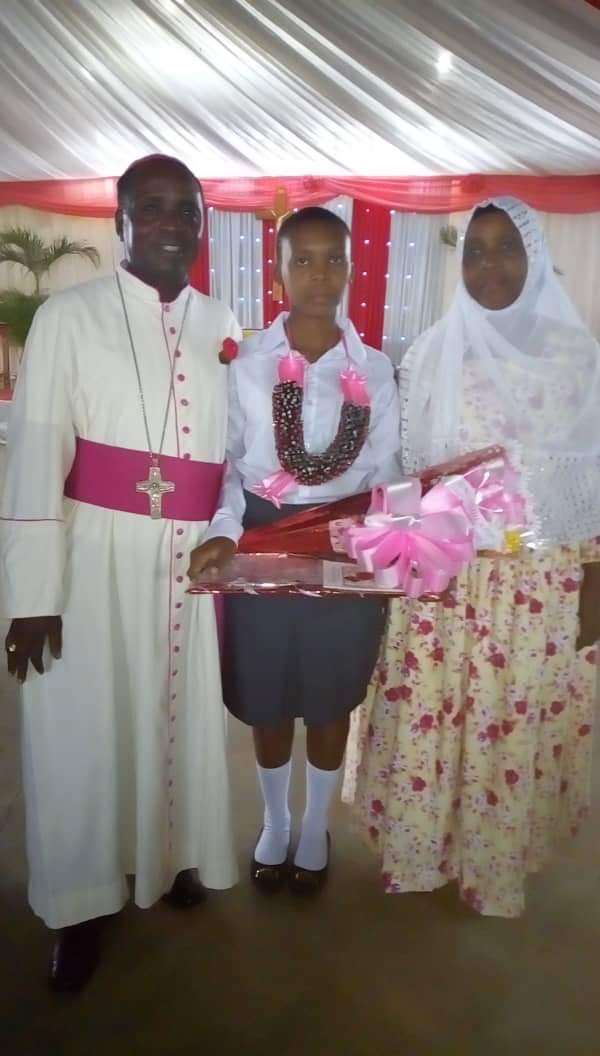 Husna with her mother and the priest at her graduation ceremony

Our friend Daniel was able to visit Husna at school and get special permission to visit with her for some photos and take enough time for her to write us a letter. She is doing really well in school, and is more determined than ever to continue on to become a pediatrician. These are the first photos we’ve received in three years, so we’re excited to see how grown up she is! Thank you, Daniel! 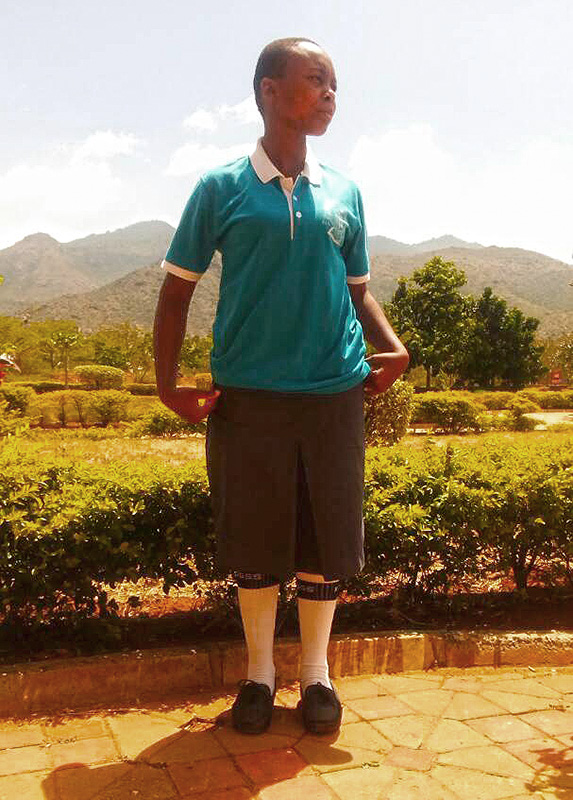 Husna outside at her school in her uniform 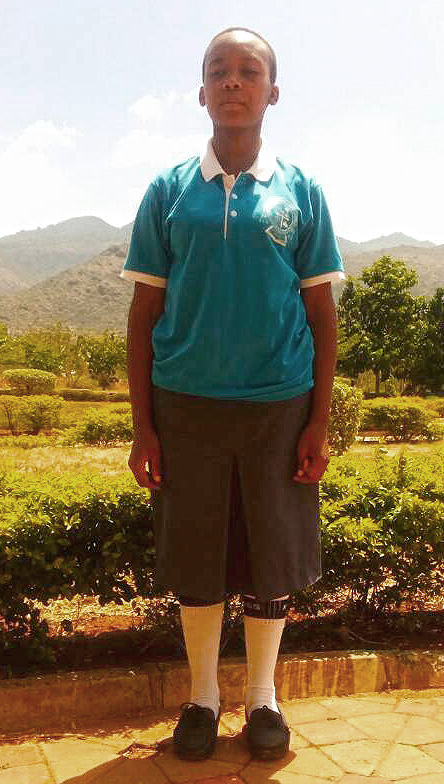 Husna at school. She’s very serious around the camera! 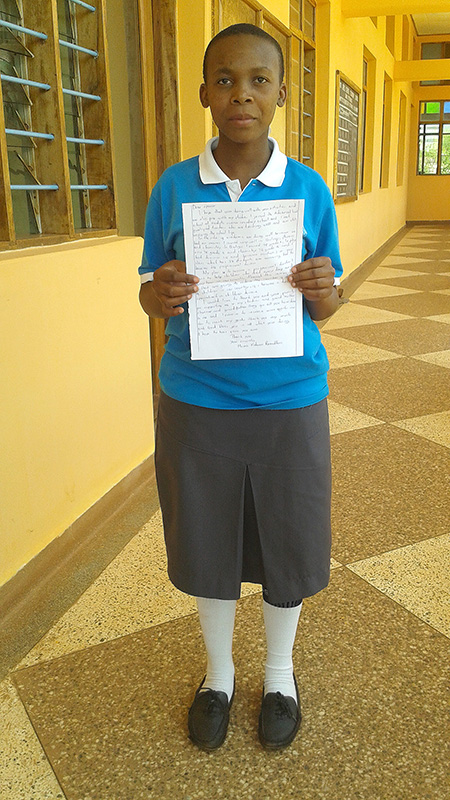 Husna with the letter she wrote to the foundation 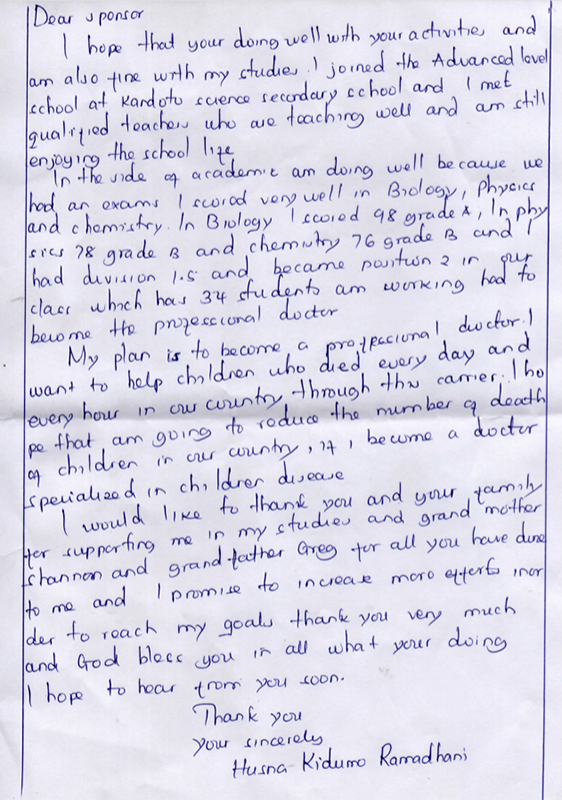 Husna’s letter to the foundation for February of 2018

Husna scored Division One in her national exam at the end of Form Four! This places her in the top one percent of all of the students who took that exam, and pretty much guarantees that she will be able to enter the university of her choice. Congratulations, Husna!

Husna has passed her Form 4 exams, although we are still waiting to hear what her grades were. We’re very happy for her. In Tanzania, many students never go beyond Form 4, which greatly limits their opportunities in life. Husna will continue on to the last two years of secondary school, and we have great hopes she’ll be able to go on to the university after that.

Below is her letter to us for the end of the year. It’s very sweet, and we are so glad she is doing so well in school and in life. 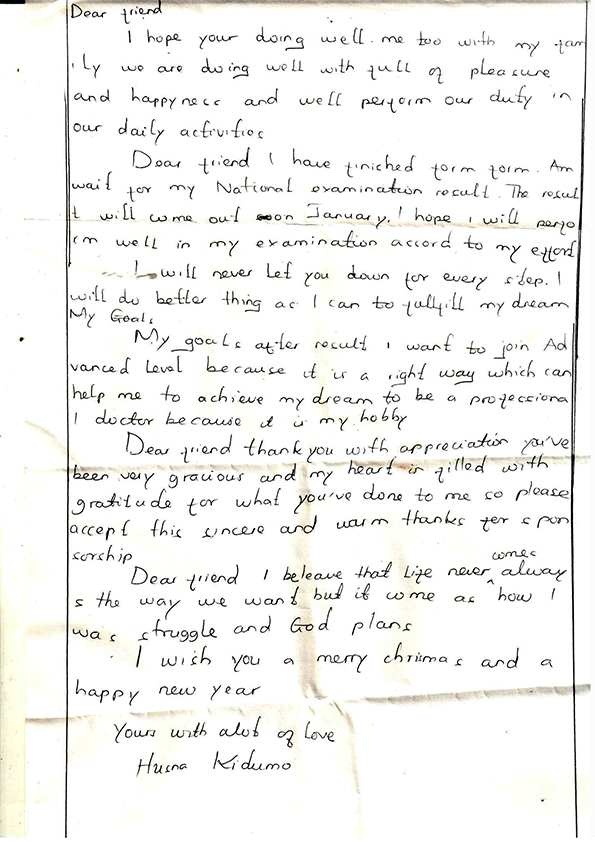 It’s been hard to get information about Husna, because communication with Tanzania is a bit challenging, and some of the letters and information that our contacts have sent us haven’t come through. But we received this wonderful letter describing the end of her 2015 year in school:

Dear Christa and One New Education,
My form 3 three year was the hardest year of secondary that I experienced. the class that was more challenge made me work my hard especially in mathematics. I tried very hard in mathematics but still only scored a D of 40 but remain in few marks to reach a C. But I learned so much and still need to improve in my form 4. Now it has been such a relief not to be sent home from school because my fees were behind.
I enjoyed to improving my academic performance because there in other subjects I get A and B like Physics, Chemistry, and Geography.
I was able to do better in Physics, Chemistry and Geography.
I prepared myself by study harder so that i can attain my goal. Also I was so excited because my result was so good.
My 3 goal for next year is to study hard in mathematics lesson by going to tuition and to make more practice because I know practice will make me more perfect.
Am now studying hard that i can add more knowledge and to help me good result in my final National Examination in form four.
To pray intensively so that God can protect me from all evil and to respect my parents and people above my age and those who we are equal.
I will assist by teaching them the study and to encourage them to study harder so they can achieve their goals. by doing so I will help to reduce the number of people who are illiterate and poverty in our family and friends and the society which is surrounding me.
My gift is to help each other who suffered from different issues. I cacn help them through higher education, seminars and share ideas which will help to stabilize their life.