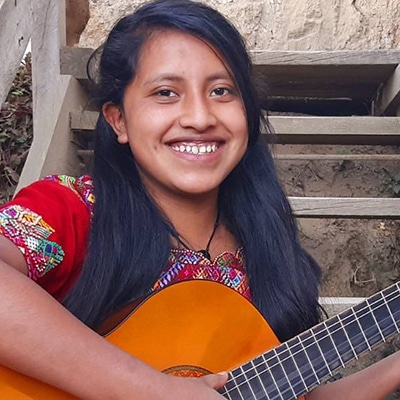 Several members of the board actually met Loyda in 2019, during a visit to Guatemala with the Flagstaff Arts and Leadership Academy. She impressed us with her beautiful Marimba playing while we were helping paint a mural on the wall of the cultural center run by her family.

When we learned that she could use some help with her school expenses, we were overjoyed to be able to help! To introduce you, we feel it best to use the words of her sponsor, Anna, who has known her and her family for a long time.

It is with great pleasure that I present the scholarship candidate Loyda Lopez Cabrera from Concepcion Chiquirichapa, Guatemala for your consideration. Loyda is a very bright and passionate 18-year-old Maya Mam musician and student at the conservatory from the Guatemalan Highlands. She is a part of a family of gifted artists including her father, an applied linguist of the Mam language, and her four brothers, Oliver – a curator, Rony – an epigraphist, Danilo – a skilled woodcarver and Judiel – a fine artist. She also lives with her two nieces and peers, Lady and Amarilis, daughters of her eldest brother who passed away 7 years ago.

There are many reasons why I nominate Loyda. She is an exceptional human being. Not only does she shine with talent when she plays the marimba and piano, she has an exceptional determination and sensitivity. Since she was little, she has loved music and she always looked up to her late brother Edgar as an inspiration to learn to play new instruments. As a child she studied at the music conservatory but soon had to leave her dream aside to continue on with her formal education.

When I met her three four years ago, she was struggling to finish 9th grade and hurting to continue on with her passion to study music. Her family has always sought out the best for Loyda, and the condition for allowing her to study music at the conservatory was to finish 9th grade with a high average. Time was running out though, the conservatory was beginning its last year of accepting teenage admissions and Loyda’ s passion was also deterring her from focusing on other subjects in school. At Vida Digna our job is to look for feasible educational options for young people in tough situations, advocate for them with their parents and educational institutions, and support them as they realize their dreams. Our function was put to work in Loyda’ s situation as we helped her build a case for simultaneously continuing 9th grade in weekend classes while starting back up at the conservatory. Against the odds she was able to reach her goal that year. She has been working steadily towards her passion and at the same time is developing a critical voice in favor of young Mayan women. It has been beautiful to witness her growth. We hope you can join us in making her dream come true.

Loyda’s application letter to us was just as lovely as she is.

I hereby send you a greeting from the village of Duraznales, Concepcion Chiquirichapa, Quetzaltenango, Guatemala. My name is Loyda Elizabeth Lopez Cabrera. I am 18 years old and I study at the Jesus Castillo Conservatory of Music in Quetzaltenango.

When I was little, it caught my attention when I saw people playing instruments. And well, that’s where the love and passion I feel for music began. I began playing an instrument when I was 8 years old. I began playing the tun [a Guatemalan instrument, like a teeny little marimba] with my brother every day. I felt like music always filled some void, and after a while I began to learn how to play the marimba. And then music turned into a passion that grew bigger every day. And when I finished primary school, I decided to study music. Every week of that year was very complicated because we didn’t have enough money for transportation, and my father began to sell beans to pay for our transportation. I finished my first year and tried to continue to my second year but the economy was terrible. I stopped studying for four years, and recently decided to study again.

I have three dreams with music, and they are:

To play in a marimba group,

Be a part of a mariachi group

And more than a dream for me, this is a goal that I have to achieve.

If you award me this scholarship and this opportunity to study, I promise to give my best in this remaining six years of study at the music conservatory and also to do my best in each performance that is presented.

Thank you for taking the time to read this letter, and for helping young people who need it. I say goodbye thanking you for everything you do for young people.

We are so excited to welcome Loyda to the foundation! The pandemic and general life in Guatemala has not been easy on many people; that Loyda is still determined to move forward with her dreams makes us very happy, and we are delighted to be able to help her achieve those dreams. 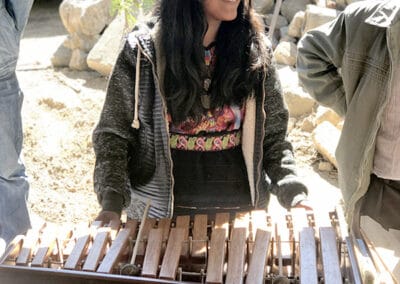 Loyda playing the marimba for our group in 2019 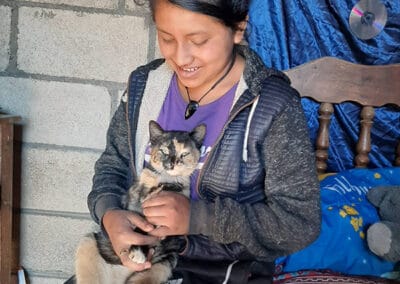 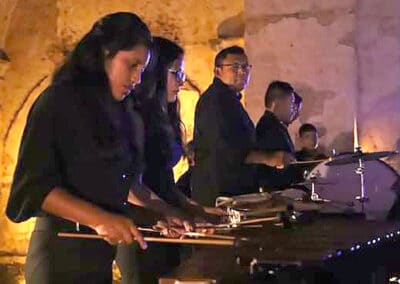 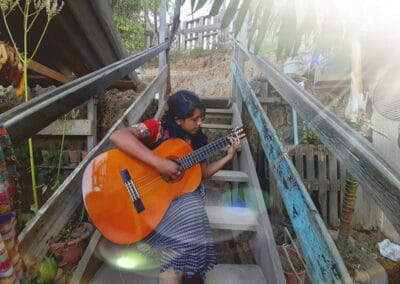 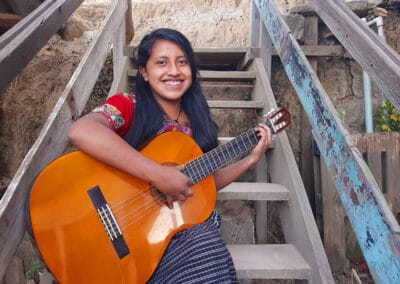 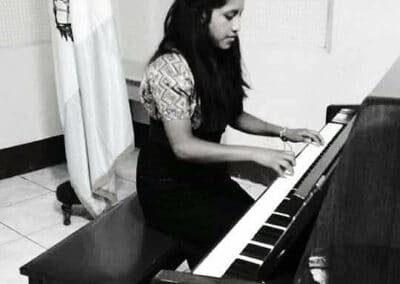 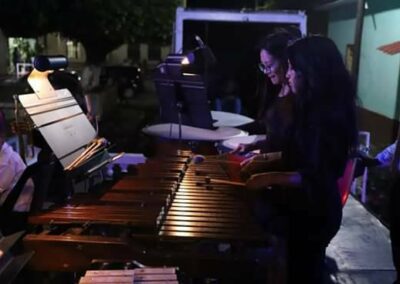 At another concert at school

Loyda passed all her classes this year and so will be moving up to the 5th year of her conservatory schooling. We are very excited about that. Her year-end letter to us was filled with information and answers to all our questions. This young woman has so many dreams and plans! It was wonderful to read about her studies, and the different things she was able to do this past year. We were also impressed that she passed all her exams and evaluations despite the fact that she had immobilized wrists to help her tendons, and her teachers only gave her a short time to make up the work!

We had to include the actual letter because her handwriting is so amazing!

A cordial greeting to the members of the board of directors of Vida Digna and to Christa Sadler, wishing you all a happy beginning of the year with your family members and in your work. I, one of the beneficiaries of the scholarships, am grateful for the opportunity that you have given me to continue studying in 4th year for my musical studies in the Conservatory of Music Jesus Castillo de Quetzaltenango. During my educational process I received economic aid that helped me to cover my expenses for the 2022 school year.

What was the most interesting thing that you learned this year?

What was something difficult that you are proud of having done this year?

Was there something unexpected that you learned? Not necessarily at school; it could also be in your life.

Something unexpected that happened to me this year was that the tendons in my wrists became inflamed. My hands were immobilized for two months and that affected me principally because during that time there were evaluations. At those times I couldn’t be evaluated in four classes, which were piano, marimba, group piano and accompaniment. At that time, they gave me only one month to make that up, given that I had to do my evaluations, and thanks to god I did pass the year.

What are you most looking forward to in school for the coming year?

Thanking you for your attention, and a big hug. 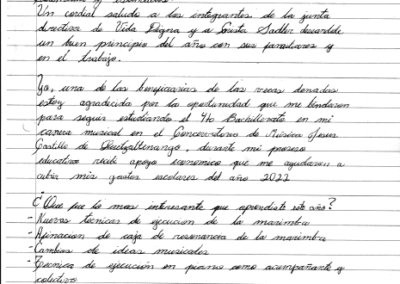 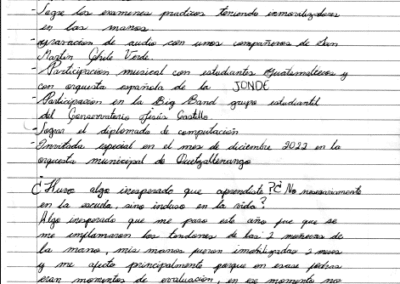 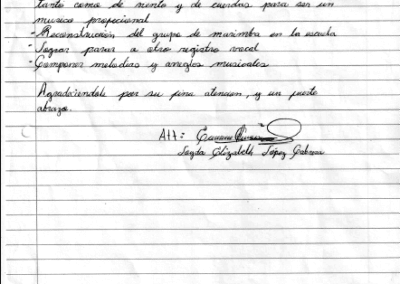 Loyda has been doing really well in her school this year. She recently sent us a snippet of a video of a recital in which she took part for the conservatory, along with a fellow marimbista and a student on horn. We’re happy to hear she’s doing well still performing. She has so much talent and we can’t wait to see where she goes.

Loyda had some struggles in her 2021 school year. She had a lot of challenges with the Covid lockdowns and virtual classes. She also got sick for a while (not Covid), and she ended up getting her keyboard a bit too late to catch up. As a result, she didn’t pass her piano class and has to repeat the year. The amazing thing is that it is clear her professors recognize her talents, because she was one of only two students afforded that opportunity. She tells us that she loves her classes, and in her letter describing last year, the challenges and the accomplishments come through. We have no doubt that her “new” old year will go much more smoothly.

Hello esteemed Christa. For me it is a pleasure to greet you from my humble home, I hope that you find yourself healthy. After this brief greeting, I tell you the following.

Was this year distinct from last year of school? If it was, how was it different?
This year of 2021 was a bit complicated since the academic level was higher and more demanding to be at an advanced level speaking in musical terms, since this year I had the experience of studying a subject to be able to advance to another level, and unfortunately I could not pass a course that was the main instrument, the piano. I passed the other courses to give me the opportunity to continue training as a musician at the Jesus Gaslillo Conservatory.

What did you learn that you simply loved and fascinated you? What did you learn that you really didn’t enjoy all that much? Describe why you felt that way about those subjects.
Learning to compose melodies, to extract harmonies from other melodies, to work in a team with other musicians, understand and learn melodic scales y functional tonal harmonies. The things I didn’t like were virtual classes, since in-person classes are more effective in terms of the academic precision of the body to the instrument.

The following is a video: Accompaniment (we have attached it below. It’s a lovely piece and she is accompanied by one of her professors on the cello)

Can you think of a one day this past year that was a wonderful day? Describe it to us. Why was it so wonderful? What happened?
During 2021 I had many positive experiences. I was invited to take part as an organizer in an important event for the indigenous peoples that was streamed online in commemoration of the International Day of Indigenous People. Also, in September we students did recitals with each instrument.

At this time I want to thank you all for having a spirit to help me since it is also a commitment for me to help other people in training them to be marimba players. Thank you.

In August, Loyda was involved in a day-long cultural celebration of Maya Mam culture, during which she played the marimba as part of a marimba group. She was written up in the newspapers, and the whole thing was recorded and shown on Facebook. Her father was one of the organizers and presenters. She simply shines when she plays music, and we are really excited for her to receive all these opportunities to express herself, her talent, and her culture. 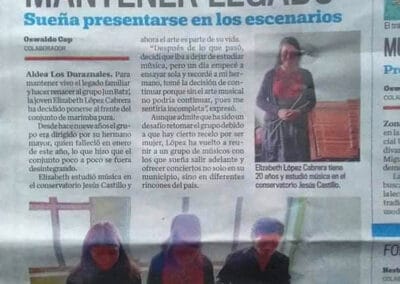 The title of this article about Loyda translates as, “Marimba Player Seeks to Maintain a Legacy.”